THE SARIMANOK TRAVELS
written, performed, and directed by Francis Tanglao-Aguas 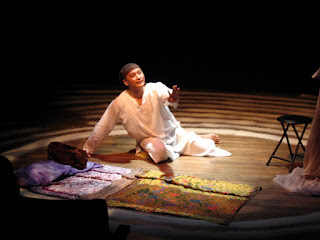 "Sarimanok" was most recently featured in a special version for the Philippine Literature Festival and Filipino Writers Summit held at the University of Hawaii, Manoa in April, 2007. The production was made possible by the Philippine Literature and Language Program, the Asian Studies Program, and the Freeman Foundation Undergrad Initiative Artist Residency Program. Special thanks to Dr. Elynea Mabanglo, Dr. Ric Trimillos and their wonderful staff and students. 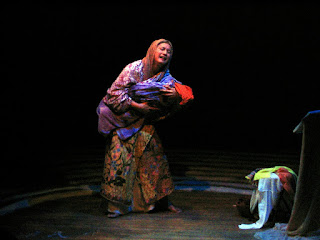 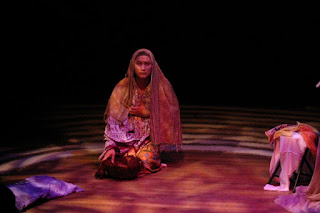 The current offering of the Asian American Theater Company is The Sarimanok Travels, a one-man show written, directed, and performed by Francis Tanglao-Aguas (Recipient of the Carlos Palanca Award, the Philippines' National Prize in Literature, 2002). This show is essentially a storytelling session, combining dance, poetry, monologue/dialogue, and singing that highlight a Filipino folktale about the history and loss of a mystical bird that brings harmony to a kingdom. This bird also has the power to give gender to newborns. 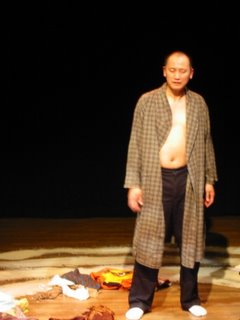 The story about the loss of this bird at a crucial moment is the starting point for the majority of the evening’s performance, which is about why Filipinos find themselves leaving their beloved motherland. The show is set within a series of flashbacks incorporating multiple characters in pre and post World War II. 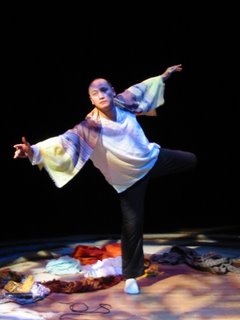 Often the play exposes raw emotions common to both the Filipino at home and the Filipino immigrant. It touches on deep-seated Filipino values that include a deep sense of family, respect for elders, and dignity. It is a proud reminder of that cliché: one can take the Filipino out of the Philippines, but one can’t take the Philippines out of a Filipino. The Sarimanok Travels is a story of resilience, strength, sacrifice, and most importantly, national pride. 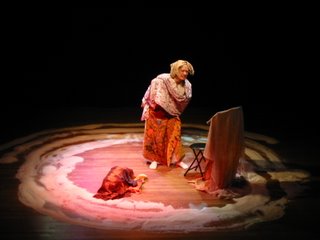 The stage is minimal and covered in circled waves of rice symbolizing many things, not the least being the rice terraces of the Philippines and the scattered Filipinos. It is as elegant as the performer himself. Francis Tanglao-Aguas plays several female characters as well as a couple of male characters. He effectively uses the sparse staging, props (pieces of cloth and scarfs tied and knotted), and most of all his expressive and sensual body very effectively to convey the different moods and characters. 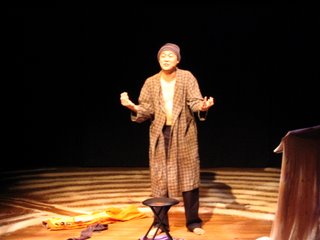 Be sure to read the program or you will not understand this is a story within a story. As one of the very few non-Asians in the audience, I certainly had a different perspective. My date, who had spent considerable time in the Philippines, was able to give me greater insight into the play and performance. 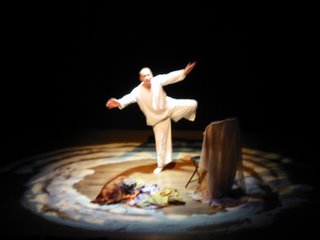 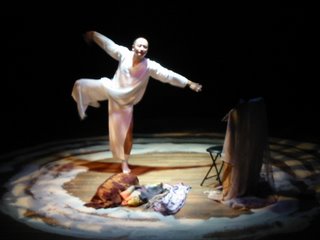 This play is profound, and I think that it has the potential for greatness. If you are Filipino or have a deep understanding of Filipino culture, then I believe that you should see this play now. It will make perfect sense and I believe that you will be moved and perhaps come away a changed person. It has that power. For the rest of us, it does not feel accessible enough. In the first ten minutes, I kept being distracted and had to pull myself back. 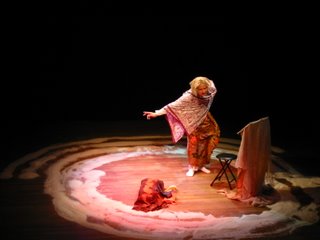 I strongly believe that having another person direct the play would help a lot; it is too much to ask one person to fill all the roles of writer, performer, and director and to give a play its full power. That outside perspective would help make the play more accessible to non-Filipinos and sharpen the shifts in character and mood. As it is now, The Sarimanok Travels is most of the way there and with a bit of tweaking, it could be masterful. 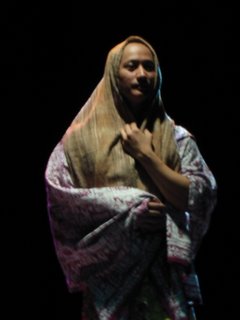 The first act is good, but the second act is great. Francis shows some of the range of his talent by bringing characters to the stage that all of us recognize and shows us their pain, which is both specific and universal at the same time. There is some audience participation, which makes each performance unique. The interaction with a couple of guys in the audience was unexpected and delightful. 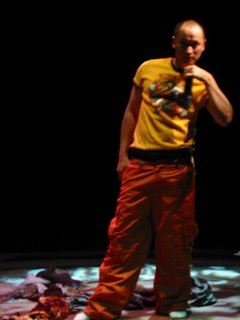 Francis is very talented and has something important to say. Both Asian and non-Asians would benefit from watching this insight into Filipino culture. I am glad that I went, and I hope that anyone who would want an enjoyable evening of theatre and to learn something about the human condition would have a great time. 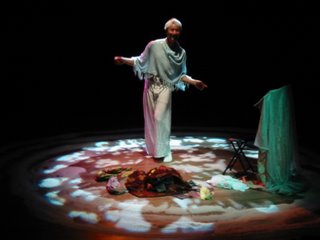